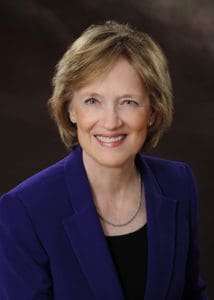 In 2005, Jeanne Whiting and Marlene Portnoy founded The Desmoid Tumor Research Foundation to facilitate and fund desmoid tumor research and support patients with access to information. Jeanne’s personal journey with a retroperitoneal desmoid tumor involved resection, recurrence, 2 1/2 years of two different chemotherapies and eventual loss of her right kidney. She is keenly aware of the needs of the desmoid community, and is dedicated to accelerating the search for a cure.

After retiring from the practice of law to raise her family, Jeanne became involved in various nonprofit organizations, including serving as Northeast Director for Choice Humanitarian (1997-1998) and Executive Director of FamilyCares (2000). She feels that getting a desmoid tumor was both a wake-up call and a calling to a new endeavor as it became clear to her as a patient that this was a field that needed jumpstarting into a new level of accelerated research to develop new treatments.

Jeanne resides in Salt Lake City, Utah with her husband Steve. They raised four sons and a daughter, and now enjoy their seven beautiful grandchildren. 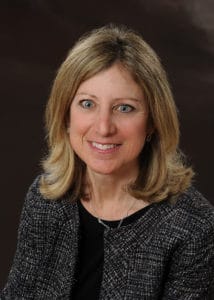 Marlene Portnoy co-founded DTRF because of the frustration she experienced with the lack of information available and the lack of research on this rare disease. Her husband, Steve, was diagnosed in August 2004 with a retroperitoneal desmoid and has since been treated with surgery and radiation.

After graduating magna cum laude from Albany State University in 1981, Marlene pursued a career in sales, which she started at Corning Glass Works from 1982-1985 in Chicago, Illinois. She then moved to New York and worked for Playskool Toys, a division of Hasbro Toys, first as a sales representative and then as a District Sales Manager for the Middle Atlantic territory from 1986-1993. She then took time out to raise her two young children and became active in community service which has included activities such as running various social action programs, participating in the local soup kitchen, and working on golf outings and walk-a-thons for local community interests.

Marlene enjoys such active pursuits as running, hiking, biking and skiing. She has a passion for travel and experiencing other cultures.  Marlene’s big bucket list items are finding a cure for desmoid tumors and going to Mt. Everest!

She resides in Hoboken, New Jersey, with her husband Steve. Marlene has two beautiful daughters, Brittany and Danielle, two wonderful sons-in-law, Adam and Mike, and adorable twin grandsons, Grant and Mason.  All take an active interest in the Foundation.

Maria T. Crocitto is CEO of Advantage Communications, LLC, a medical education and communications company she founded in New York City in 1997. Ms. Crocitto has been a leading expert in implementing global education plans for medical societies, research centers, and the pharmaceutical industry. Her hands-on experience ranges from clinical research to journalism to the development of strategic medical education programs. After attending the Post-Baccalaureate Premedical Program at Columbia University, she earned a Master of Arts degree in Journalism and Mass Communication and a Certificate in Science and Environmental Reporting from New York University. Prior to founding Advantage, as a science writer at Medical Tribune, her articles were syndicated in Asian Medical News and the Japanese hospital posters Medical Bulletins. Ms. Crocitto also worked for six years in the United States Bureau of the Italian newspaper La Repubblica. She is fluent in English, Italian, and Spanish. Outside the office, she has devoted her time to serving on the board of directors of the Desmoid Tumor Research Foundation, and working on projects in Africa and the U.S for AIDS foundations, overnight homeless shelters and soup kitchens, supporting women survivors of war, and fundraising for hospitals’ neonatal intensive care units. 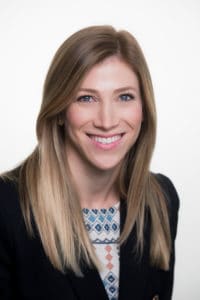 Nicole Deichert and her family have been involved with fundraising efforts and raising awareness for the Desmoid Tumor Research Foundation since 2012. Her brother, Matt, was diagnosed in 2009 with an intra-abdominal desmoid, has undergone surgeries, chemotherapy and radiation, and has been in remission since October of 2013. Nicole discovered DTRF in the midst of a crisis, and the support Matt and her family received from the foundation was invaluable. Nicole wanted to find a way to give back and support this amazing organization, so with her brother, Nicole co-founded and leads an annual fundraiser, The Desmoid Dash 5K. Through all their fundraising efforts, Nicole, her family and friends have raised roughly $700,000 for DTRF. Nicole is passionate about raising awareness about desmoid tumors, as well as raising money to support ongoing research efforts, and is very hopeful that someday a cure will be found.

Nicole graduated from Saint Norbert College in 2008 with a BA degree in International Business and Spanish. She is fluent in English and Spanish, and she is a currently a Human Resources leader at Ecolab Inc. headquartered in St. Paul, Minnesota, where she leads HR initiatives for the Latin America region. Prior to that, Nicole held various HR roles of increasing responsibility at Target Corporation headquartered in Minneapolis, Minnesota.

Nicole resides in Minneapolis, Minnesota, with her husband Sean. She loves to travel and learn about other cultures, and also enjoys staying active by golfing, hiking, playing tennis, skiing and biking.

Joel Koral and his wife Marci, have been involved with fund raising for the Desmoid Tumor Research Foundation since its inception in Sept 2005. Due to Joel’s very close relationship with Steve and Marlene Portnoy, he shared their frustrations over the lack of information that was available when Steve was initially diagnosed with a Desmoid tumor.

Joel graduated from Albany State University in 1979 with a BS degree in accounting. Since 1983 he has been a Financial Representative with Northwestern Mutual. Joel has received his Chartered Life Underwriter ( CLU) designation along with the Chartered Financial Consultant designation ( ChFC).He is a licensed Financial Representative and has passed the series 6, 7 and series 63 exams. He has consistently been a sales leader with Northwestern Mutual. Joel also consults with over 200 small business owners in the New York New Jersey and Connecticut area helping them with their group benefits for their employees.

Joel and his wife currently reside in Suffern, New York and they have 2 sons, Neal and Michael. 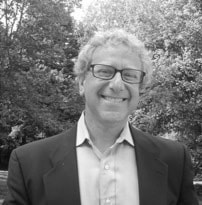 Jerry March is currently Executive Vice President of KenKen LLC, a digital marketing company based in Pleasantville, New York that develops unique products for the toy, gaming, and education industries. After graduating cum laude from Yale University with a BA in History and Harvard Business School, Jerry pursued a successful career in general management as an executive and investor.  He co-founded Arden Group Publications, a national publisher of regional consumer wedding magazines, where he served as President, and was a principal and EVP at Venture Opportunities Corporation, a Small Business Investment Company (SBIC) where he invested in, and provided strategic planning and senior management, to a variety of businesses owned and operated by minorities and women.

For the past 11 years, he served as a senior executive at MBI, Inc., the world’s leading direct response marketer of consumer collectibles, where he was in charge of all strategic development, business operations, management, and marketing for a $60 million division. In addition to his executive experience, Jerry has been actively involved in a number of non-profit entities.  For four years, he served as the Chairman of the Byram Hills Education Foundation where he raised over $1.4 million dollars to fund grants proposed by the district’s educators and administration.  He was also a founding member of the Board of Directors for the Banksville Nursery School and is currently serving on the Board of Trustees for the North Castle Public Library. Jerry and his wife Mary live in Bedford, New York, and are proud parents of three children. 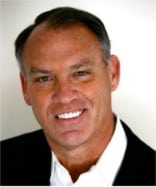 Kevin Reilly is a well-renowned Motivational Speaker and a former Linebacker for the Philadelphia Eagles. In 1979, Kevin underwent the life-changing amputation of his left arm as a result of a desmoid tumor.

Kevin’s story begins in Wilmington, Delaware where he graduated in 1969 from Salesianum School where he was captain of his varsity football and basketball teams and a starting catcher on the baseball team. He attended Villanova University in Pennsylvania on a full four-year athletic scholarship, graduating in 1973. Kevin was Villanova’s MVP and first team All-East as a linebacker. Upon his graduation, he was drafted in the seventh round of the college draft by the Miami Dolphins. In 1976, Kevin returned home to serve as captain of the “special teams” for the Philadelphia Eagles. Later in that year, Kevin was traded to the New England Patriots. Upon his release from the Patriots, he began working for the Xerox Corporation in Wilmington and recently retired as Marketing Manager after a 30 year career there.

Kevin has been named to the Delaware, Villanova University and Salesianum High School Halls of Fame.

In 1980 Kevin started sharing his story as a motivational speaker. His emotional and physical comeback and the trials and difficulties he encountered along the way make him one of this country’s most valuable speakers. Kevin is known to his peers and business associates as being centered and knowing who he is. He has a positive attitude that touches all with whom he comes in contact. 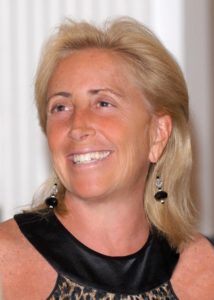 Barbara Ann Sellinger
Board of Directors

Barbara Sellinger is the Co-Chair and General Counsel for Arts Horizons. Previously, she was the General Counsel for Kamine Development Corp, the Group Vice President, Enterprise Labor and Employment Law at Wyndham Worldwide, Chief Legal Officer, Labor and Litigation Counsel at American Standard and Chief Labor and Litigation Counsel at RJR Nabisco. Early in her career, she worked for the National Labor Relations Board Division of Judges and the U.S. Department of Labor. She previously worked as an associate at the labor and employment law firm of Grotta, Glassman and Hoffman and in the employment law group of the law firm Cohen Shapiro. She was a partner at the labor and employment law firm of Epstein Becker and Green. Ms. Sellinger received her bachelor’s, Magna Cum Laude/Phi Beta Kappa/Phi Kappa Phi from Syracuse University, her master’s, from the Maxwell School at Syracuse University and her law degree from the Washington College of Law at American University, where she was awarded a dean’s fellowship. 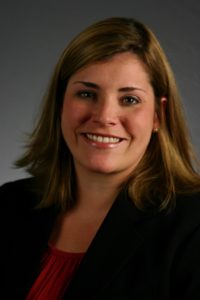 Rachel Sitta is Director of Contracts, Compliance and Pricing for Cardno International Development; an international consulting firm based in Arlington, Virginia, which is dedicated to the social, economic and physical development of communities around the world. Rachel holds a Bachelors of Science in Finance from The College of New Jersey and a Professional Master’s Certification in Government Contracting from The George Washington University. Since 2002, Rachel has pursued a career with nonprofit organizations and other international development firms, which provide similar program delivery and services to help the world’s most vulnerable populations. Rachel has an extensive background in pricing, negotiating and managing US Government and USAID contracts, grants and other assistance awards as well as awards from a variety of other major international donors such as DFID, ADB, World Bank, DANIDA.

Rachel’s personal journey with her desmoid tumor started in 2012 and has involved massive chest wall resection, a near immediate recurrence, and a variety of drugs and chemotherapies. Rachel is committed to raising funds and awareness to support research for desmoid tumors.

Rachel resides in Vienna, Virginia with her husband Grant and their daughter, Adalyn. 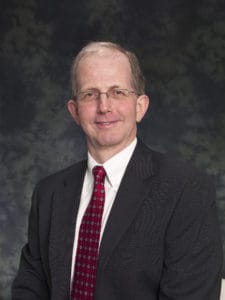 Steve is a consultant providing advice to companies in the areas of trading, financial markets and risk governance. Previously, he was Managing Director of the Model Risk Management team within the Risk Division of Goldman Sachs in Salt Lake City.  Prior to joining Goldman Sachs, he was a principal in KPMG’s Advisory practice, where he led KPMG teams working on model validation, model governance and financial instrument valuation. Earlier in his career, he worked at Citibank and ING as a trader and structurer of municipal derivatives and products.