My name is Dr. Mrinal Gounder, M.D., and I am a medical oncologist practicing at Memorial Sloan Kettering Cancer Center in New York City. For more than a decade, I have devoted my efforts to building a clinical practice where I take care of a large number of people diagnosed with desmoid tumors. I am also the Scientific Director of DTRF. As a cancer researcher, I am passionate about finding a cure and discovering new drugs to treat desmoid tumors.

If you are reading this page, it is likely that you, your child or your loved ones may have been diagnosed with a desmoid tumor. It is normal to feel frightened, anxious, frustrated, confused or isolated. This is a very rare condition, but the good news is that you are no longer alone. We are here to help and support you. We hope that this web page provides you with information that will empower you and your doctor to make an informed medical decision together. We hope that the broader patient community of DTRF will be a safe space for you to meet other patients and their families – to connect and exchange your stories and experiences.

The good news is that this is often a treatable (and sometimes even curable) condition. I am happy to share that in the last decade – thanks to the Desmoid Tumor Research Foundation – we have been able to build a community of patients, their caregivers, doctors and researchers. This has helped gather a tremendous amount of knowledge about how best to treat desmoid tumors. Thanks in part to DTRF’s support for cutting-edge research, we are now seeing an exciting number of new drugs and modalities to treat this condition.

We are here to help and support you.

What is a desmoid tumor or aggressive fibromatosis?

Desmoid tumors arise from a cell called a “fibroblast” or “myofibroblast” that has proliferated excessively. A fibroblast is a type of cell that is found throughout our body in connective and soft tissues. They are the structural support for our vital organs (e.g. lung, liver, blood vessels, heart, kidneys, skin, intestines etc) and are also involved in wound healing. Because of the prevalence of connective and soft tissues, desmoid tumors can occur at most sites of the body and are commonly found in the extremities, abdominal wall and intra-abdominally.

The desmoid tumor clinical course is unpredictable, and some desmoid tumors will spontaneously regress (~20%), others will remain stable (40-50%) and some will increase in size (30-40%). They can be locally invasive and have a high incidence of local recurrence, but they do not metastasize from one body part to another. For many patients, desmoid tumors are not life-threatening. However, their clinical course is unpredictable, and research is ongoing to determine what prognostic factors might help discern which desmoid tumors will need treatment and which will not. In some cases, desmoid tumors can become life-threatening when they compress important organs such as intestines, kidneys, lungs, blood vessels, nerves, etc.

In the United States, approximately 1,500 people are diagnosed with desmoid tumors every year. This means that out of a million people approximately 5-6 people are diagnosed with desmoid tumors each year. Because of inconsistent and inaccurate reporting procedures, accurate statistics about the number of desmoid tumor cases are difficult to calculate. Individuals between the ages of 15 and 60 are most often affected, but this disease can occur in anyone including very young children. They occur more commonly in women than in men (2:1), and there are no racial or ethnic differences in predisposition to disease.

The exact cause of most desmoid tumors is unknown, and thus they are called “sporadic” or random. Up to 90% of desmoid tumors arise sporadically and have a mutation in a gene called beta-catenin (CTNNB1). Common point mutations within the CTNNB1 gene are known, such as T41A, S45F, S45P, but are still an active topic of research as to their relevance to the disease. These point mutations are not, at this time, clinically actionable.

A minority of desmoid tumors are caused by a heritable cancer predisposition syndrome called Familial Adenomatous Polyposis or FAP. These desmoid tumors are the result of mutations in the adenomatous polyposis coli gene (APC). Patients with FAP are predisposed to forming numerous polyps in the intestines and – if untreated – go on to develop colorectal cancer. Patients with FAP are often recommended to undergo surgical removal of their colon and/or rectum. Approximately 10-30% of FAP patients will develop a desmoid tumor in their lifetime. FAP-associated desmoid tumors are most commonly found intra-abdominally and may be larger and multifocal. A specific subtype of FAP is called Gardner Syndrome.

Studies have associated desmoid tumors with prior trauma, high estrogenic states, and pregnancy. These associations are not fully understood, and research is ongoing to better understand them. 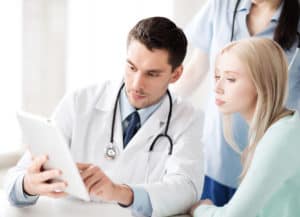 A mutational analysis is recommended to confirm the diagnosis and if the tumor is likely sporadic (CTNNB1 mutation) or arises from syndromic condition such as FAP (APC mutation).

Desmoid tumors may also be evaluated by non-invasive methods such as ultrasound, CT and/or MRI scans.

There is not one standard of care treatment protocol for desmoid tumors. Efforts have been pursued to standardized care, and evidence-based, consensus guidelines for treatment were published in 2020 by an international team of desmoid tumor experts. Read The Global Consensus Paper on the Management of Desmoid Tumors to learn more about consensus treatment guidelines.

It is important that patients be evaluated and ideally treated by a desmoid tumor expert. These experts are often specialists in sarcoma care. Sarcoma specialists are found at major academic medical centers and can help support patient care through a multidisciplinary team that includes medical oncology, surgical oncology, radiology, interventional radiology, pathology who have significant expertise in desmoid tumor care. These hospitals may have designations as a National Comprehensive Cancer Network (NCCN) or as a SARC Center.

Articles on Past Clinical Trials