The DTRF Dr. Dina Lev Early Career Investigator Grant is named in honor of Dina Chelouche Lev, M.D., an early leader in desmoid tumor research. Dr. Lev was one of the original recipients of research support from the Desmoid Tumor Research Foundation in 2007, starting a reciprocal relationship that continued until her untimely passing in 2020 at the age of 55. The award embodies Dr. Lev’s endless enthusiasm and tireless effort toward moving the science of desmoid tumors forward, as well as her commitment to the training of young surgeons and scientists interested in connective tissue tumor oncology, including desmoid disease. 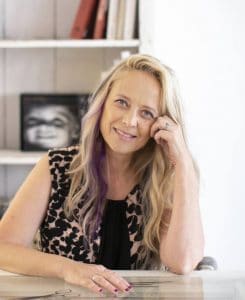 Born in Israel in 1965, Dina matriculated at the Sackler School of Medicine in Tel Aviv graduating as one of the top students in her class. Her surgical training at the Ichilov Medical Center was followed by an academic appointment as an Assistant Professor of Surgery at Ichilov. Her interest in connective tissue tumor oncology, already established during her faculty time in Tel Aviv, was further reinforced in a subsequent position at the University of Texas MD Anderson Cancer Center where she worked under the direction of Dr. Isaiah Fidler, Chairman of the Department of Cancer Biology. While serving in this position she met Dr. Raphael Pollock who shared her clinical and research interests and ultimately became her husband.

Dr. Lev subsequently accepted a faculty appointment in the Department of Cancer Biology at MD Anderson, becoming the Principal Investigator of the MD Anderson Sarcoma Research Laboratory. An extremely fruitful seven year period ensued in which numerous original observations about sarcoma and desmoid molecular oncobiology were made, including pioneering studies about the role of mutation in CTNNB1, the gene controlling production of beta-catenin, the most commonly overproduced protein in desmoid tumor, as well as mechanisms of chemoresistance in this and other connective tissue malignant diseases.

In 2013, Dina made a decision to return to Israel to resume the practice of cancer surgery, focusing on carcinoma of the breast. She became one of four surgeons in Israel to hold the rank of Professor of Surgery in the most highly competitive and stringent academic track, as well as the first female surgeon in the history of Israel to achieve this exemplary status.

The Dr. Dina Lev New Investigator Memorial Research Grant is given to promising new investigators who are dedicated to advancing the science of desmoid tumors with an eye toward exerting a long-term influence in the field.